HomePublic Meeting on “Bank Mergers – A Step Towards Reversing Nationalisation” 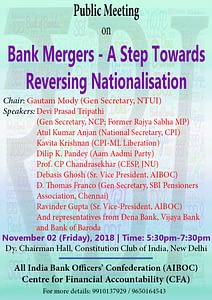 Public Meeting on Bank Mergers – A Step Towards Reversing Nationalisation

Finance Minister Shri Arun Jaitley announced on September 17, 2018, the decision to merge Bank of Baroda, Dena Bank and Vijaya Bank. The stated objective of the government as reported in the media was “Aspirations of the fastest growing economy have to be supported by stronger and globally competitive banks”. As was the case during the announcement of Demonetisation, instead of the apex regulator i.e. Reserve bank of India, the Government announced a decision which was purely under the purview of RBI.

At various instances in the last four years, there had been mention of merging the existing 21 PSBs to form four or five global lenders.
The Narasimham Committee in 1991 recommended a three-tier banking system with 3 large global banks, 8 to 10 national banks and several regional banks. This move seems to be implementing the Committee’s recommendations without any consultation or analysis of the current situation of the PSBs. AIBOC along with the banking fraternity believes that the merger of PSBs will not address the problems faced by the sector, rather only weaken their position. The decision of merging the three Public Sector Banks has come after subverting the Parliament in the same way as it was done in the case of Demonetisation.

Why Bank Mergers is not a solution?
The Union government is pushing through the merger of PSBs with a misplaced notion that fewer stronger banks will be “too big to fail”. It’s ironical that the news or bank merger was announced on the 10th anniversary of the fall of Lehman Brothers, the fourth largest Bank of the United States, which makes us seriously question the lessons that the government has learnt from the global financial crisis. In the aftermath of the crisis of September 2008, prominent economists have prescribed to move towards smaller banks.

There is no evidence to back up that bigger banks will become stronger and more efficient banks. Even supporters of the merger agree that it would not result in improving asset quality as there is no fresh infusion of capital. Hence, mergers will not be a solution to the ongoing problem of NPAs faced by the public sector banks.
Several case studies have shown that merger announcements trigger confusion, anxiety and insecurity in staff, leading to slowdowns in business. The organisational disruption through the merger procedures relegates every other activity to the backstage. Banks involved in the merger have to do fire-fighting for the next few years, adversely affecting other banking activities in order to integrate people, processes and procedures.

Lessons from the Past:

Post banking reforms, there have been 32 mergers, all of them of private banks with the public sector banks. In 1993, however, RBI forced a merger between Punjab National Bank (PNB) and New Bank of India, as the latter had low liquidity rate. PNB suffered a net loss of Rs.96 crore in 1996, following the merger. It had to face several problems and litigation relating to absorbing the staff of New Bank of India in its stream. It reportedly took PNB five years and more to get over the merger effect. A similar fate was met by Oriental Bank of Commerce when Global Trust Bank (private Bank) was merged with the former in 2004.

The recent merger of SBI and its associates last year too had similar results. Even though technically, it was an internal reorganisation than a merger, the bad loans of the associate banks hit SBI’s profit adversely. SBI’s operating profit came down from Rs. 12,400 crores in Q3FY17 to Rs. 11,800 crores in Q3FY18, not to mention the first-ever loss in over a decade after accounting for provisions. The merger was not only a commercial failure but according to Bloomberg it also resulted in closing down 1,805 branches, fall in staff count by 15,762 due to retirement (VRS included) despite the new addition of 3,211 and administrative hassles even though the merger was within associate banks.

When the lessons of SBI merger is clear as daylight, and when global experiences of big banks are glaring bright, it is intriguing that the government is rushing to merge more banks. Why is the government pushing for this without initiating a public debate? Why stakeholders have not been consulted and are taken for granted? Why have the positions of workmen and officer Director in the Boards of all PSU Banks are kept open for nearly three years now? If not the government, then who would protect the depositors’ rights?

These are some of the pertinent questions that are being raised.
In order to discuss these concerns in detail, a public meeting is being organized on: